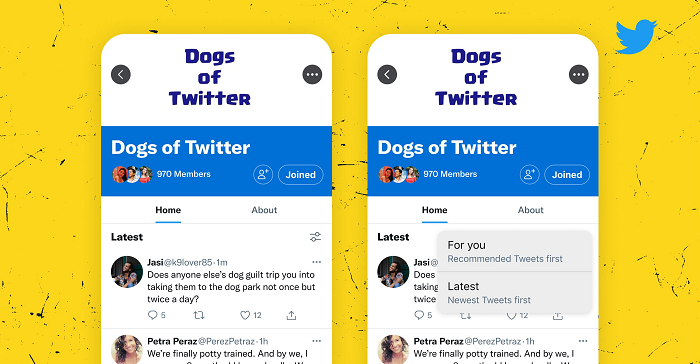 I’m still not sold on Twitter Communities, and the potential for it to become a major element of the app experience.

That’s not to say it’s not going to be valuable, nor that some Communities will end up being popular. But how many Twitter users are really, actively engaging in Communities, or even want to, given the app’s ‘global public square’ ethos?

Regardless, Twitter seems determined to push ahead with the project, with its latest Communities addition being algorithmic sorting within Communities streams.

a new way to view your Communities timeline: sort Tweets by For you (most relevant to you) or Latest (most recent)—the choice is yours!

we’re testing this on iOS, Android, and web to see if it improves your Communities experience ???? let us know what you think pic.twitter.com/ygWXfBxbQf

As you can see in this example, now, users have the option to sort their Communities feed by either ‘For you’ (sounds familiar), which will display the top tweets in each community, based on your engagement history, or ‘Latest’, so the newest community contributions appear at the top.

“The setting each person chooses will become the new default every time they visit that Community. The setting is unique to each Community and can be changed at any given moment, giving people the ability to choose and customize how they view each of their Communities separately based on their preference.”

That could make it easier to engage in your chosen communities, especially in more popular groups, by surfacing the most relevant tweets for you. If, of course, Twitter’s algorithms are any good at highlighting the best tweets to each user.

Thus far, Twitter’s algorithm matching hasn’t shown much nous for personalization, with, generally, the people you engage with most or the most popular tweets taking priority in algorithm-defined feeds.

That makes sense, but there’s not a lot of advanced learning being applied – Twitter’s not great, for example, at showing you content that you may be interested in based on your previous activity.

The Spaces tab is a good example of this – tap over to the Spaces tab right now and I’m tipping you’ll have trouble finding in-progress Spaces relevant to you, with the listing simply showing the most popular Spaces broadcasts at any given time.

As TikTok has shown, algorithm personalization is key to maximizing user engagement, with the TikTok system able to adjust to your preferences very quickly, and keep feeding you more of what you like. Twitter’s systems are nowhere near that, with its ‘Accounts to Follow’ and ‘Topics’ recommendations regularly being way off anything close to relevant for most users.

That’s a large reason why Twitter has failed to capitalize on its position as the key source for real time discussion. Twitter has access to more trending conversations than any other platform, but it’s never found a great way to highlight those chats to each individual user. It still could, theoretically, and maybe that’s part of Elon’s grand plan. But without that capacity, most of these types of ‘top tweets’ displays don’t really push the needle on engagement.

Still, maybe that’ll be different in Communities, where you’re already interested in the main topic anyway, and maybe that will help to uncover more relevant, more interesting discussions.

Right now, based on anecdotal evidence, Communities, in general, doesn’t appear to be taking off, but Twitter has said that it’s happy with Communities take-up, and it could still become a thing, if Twitter can find more ways to maximize engagement.

Though that could be even more difficult now, with Twitter refocusing its resources on its core elements, and shifting away from experiments.

As reported by Bloomberg:

“Executives told workers of plans to pull back resources for some long-term ambitions, including audio spaces, newsletters and communities, in favor of focusing on more immediate needs, like user growth and personalization efforts, according to people familiar with the matter.”

Maybe, then, this could be one of the last Communities updates for some time – and maybe, that new focus on personalization will yield real results on this front.

Confusing times at tweet HQ, which makes it harder to know what to expect.

Communities users can choose between timeline sorting options via the upper right-hand function menu in each Community.